It was about 4am somewhere in Ohio when I turned the keys in the ignition and nothing happened.  Not even that click sound.  I had shut my car off and left my headlights on while I waited for the construction worker to flip his sign from "STOP" to "SLOW." Thankfully I was driving a stick-shift and quickly remembered I could get a light push and get it started in first gear. There were a few cars waiting behind me but I was quite nervous about approaching their vehicles in the middle of the night to ask for help. Luckily there was a cop parked on the side of the road. I decided to get out of my car and go ask him for help.  As I approached the cop car it occurred to me that this might look a little unusual to the policeman.  My first thought was he was gonna get out of his car, tell me to stop and threaten me with his taser. So I put my hands up and felt like I should slowly walk up without any sudden movements.


The police officer cracked his window and asked, "You need some help?"
He had a very gentle and friendly voice. I immediately put my arms down, noticing there was nothing to be scared of. I began to explain that I needed a push because I turned my engine off and left the headlights on, thus, draining the battery. As I was about to mention that I was also rocking out to some random radio station, the officer interrupted me,

"Well let me give you a push so you can get her started before we let the traffic through"
As we headed back to my car he asked, "Where ya' comin' from?"
I said, "North Carolina"
He gave me a quick glimpse from head to toe and asked, "Where ya' headed?"
I responded, "uhh, Iowa."
We got to my car and I realized I had never actually done this before, I was always the one doing the pushing. I got in the driver seat like I knew what I was about to do, and as the officer pushed my car just fast enough, I decided to hit the ignition and throw it in first. It started up easily. I pulled over to thank the officer as I had to wait for the workers sign to flip around and say, "SLOW."  The officer approached my car window and before I could thank him he asked,

Upon arriving in Iowa, Davenport specifically, I felt something good was going to happen. All of a sudden I was rushed into getting dressed and happily found myself drinking a delightful pale ale, overlooking the Mississippi River. A few hours later I was found interacting with a local artist whose studio happened to be above the bar. The following morning I came across some pictures on my camera from a rooftop, reminding me of the ladder I climbed the night before. And then the wedding began... 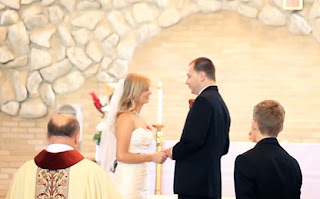 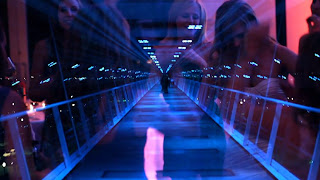