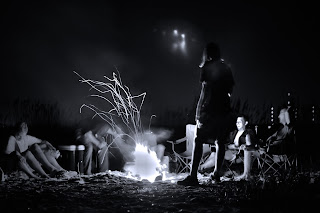 There was a bright red light peaking out over the waters of  the Atlantic Ocean.  We were on Masonboro Island in the middle of night when it seemed like the sun had decided to come up instead of the moon.  The night brightened as if a torch had been lit miles up in the sky.  I wondered if the sun just wanted to come back up for another go at it. Just as the moon came over the horizon it was as red as a stoplight and then slowly turned white as it swept across the night sky.


I quickly set up my camera and hurried to get the shot. The next morning I realized I focused on the beach right in front of me and not the moon. Arg... Kinda how my year went.
The music is by Warsaw Village Band and everything was shot in North Carolina with my Canon t2i and Magic Lantern.  If you like it, subscribe to my youtube channel for much more to come. Happy New Years.